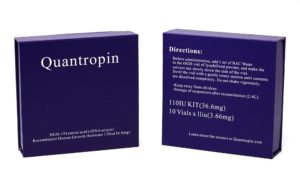 Human growth hormone (hGH) is a polypeptide of approximately 22,000 daltons in size that is synthesized in the pituitary. Mature hGH has been produced in Escherichia coli bacteria using recombinant DNA technology. The process involved cloning of cDNA to the pituitary hGH mRNA and the subsequent adapting of the cloned gene for expression in E. coli. hGH, as it is synthesized in the pituitary, is made as a prehormone containing a hydrophobic leader peptide of some 20 amino acids in length. This leader peptide is proteolytically removed by the pituitary during the secretion of hGH. However, most E. coli do not have the biochemical machinery to do the same processing efficiently, thus, 84 base pairs of double-stranded DNA were synthesized to tailor the hGH cDNA for direct expression. The process involved ligating the restriction fragment of the cDNA coding for amino acids 24 through 191 of growth hormone to a synthetic sequence which coded for a start codon (i.e., a methionine) and the first 23 amino acids of GH. Thus, the molecule synthesized in E. coli contained the full 191 amino acids of mature GH and one additional amino acid, an amino terminal methionine, from the start codon. 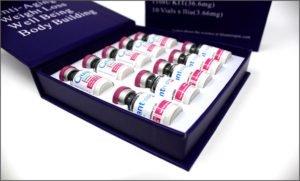